a book review essay of The Education of an Idealist, by Samantha Power

- by Jamie Arbuckle for Peacehawks

… the Furies might sometimes sleep, but they were there, always there in the dark corners, and now they were awake and the iron clang of their wings was in her brain …

Since the publication in 2002 of her Pulitzer Prize winning book  A Problem from Hell,  which explored American actions and inaction in responding to genocides from Armenia to Kosovo, Samantha Power has been one of the world’s foremost and effective chroniclers of human rights.  In her journalism, in her several books, in her teaching and in her work, she has tirelessly and courageously exposed the deeds and misdeeds of those, mostly governments, who abuse and persecute, mostly their own people.  This, after having devoted so much of her life and her career to the stories of others, is finally her story, and it is well worth reading.

This book is, before everything, an autobiography, and that is in a sense a pity. Peacehawks is generally more interested in events than in personalities; we care more about what happened and why than we care about who was there, still less who is to blame. That is not to say those latter are of no consequence, but they are not our primary interest. The presence and the actions of Richard Holbrooke are of lesser consequence to the Dayton Accords which ended the war –  but not the conflict – in Bosnia Hercegovina.  We say it is a pity that this excellent book is so personally autobiographical, because it might otherwise have been a splendid vehicle to educate in more depth about the circumstances and the agencies, the stakeholders and the players in those years preamble to and beginning our young and already-tattered century.

We will first review the book she did write – and then we’ll discuss the book we hope she still might write.

END_OF_DOCUMENT_TOKEN_TO_BE_REPLACED 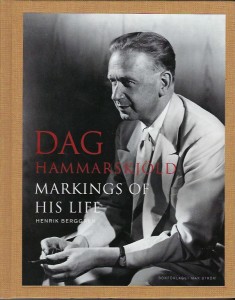 A review essay, based on Dag Hammarskjold: Markings of his Life, by Henrik Berggren

Reviewed for Peacehawks by Jamie Arbuckle

You asked for burdens to carry – And howled  when they were placed on your shoulders.

On 4 November 1956 the General Assembly of the United Nations requested the Secretary General, who was then Dag Hammarskjold, “to submit a plan for … an emergency international United Nations force to secure and supervise the cessation of hostilities” in the Middle East. Peacekeeping had been born. It was five days before my sixteenth birthday, and I was already a voracious reader and a heavy consumer of news. I said to my father, “I have seen the future, and it has to work.”  My father, who had lived through two World Wars, the Great Depression and the Korean Conflict, was in my memory of those distant days, reserved in his reaction.  But this was to be my world, not his – his work was largely done. Here was the beginning of my adulthood and the grounding in me of my vocation: I was to be a soldier for peace.

So for me any talk or remembrance of Dag Hammarskjold is intensely personal, sending me back  to my earliest beginnings, and spanning much of the rest of my professional life, and beyond. The real prime mover of the birth of peacekeeping was Lester B. Pearson, who was awarded the Nobel Peace Prize for his efforts (so was Hammarskjold, posthumously), and was later Prime Minister of Canada as my adopted country became one of the leaders of international peacekeeping operations. Shortly after my retirement from the Canadian Army, I met my wife as we both worked at the Lester B. Pearson Canadian International Peacekeeping Training Centre in Nova Scotia. Today on our shelves we each have our heavily annotated copies of Markings,  which we have each carried for  over 50 years.

Henrik Berggren’s book Dag Hammarskjold – Markings of his Life is a skilful, entertaining and entirely useful re-telling of the more personal aspects of the life. It is especially important that it is retold afresh in and for this generation, from whom these important events might otherwise slip away.  The book is generously illustrated, affording us a real feel for the personalities and the times.

This book might easily be dismissed as hagiography, but Hammarskjold’s was in many respects an exemplary life, and hagiography does not imply inaccuracy. In these days of baseness of aims and personalities, and the almost total absence of international statesmen of character, there is certainly much to be gained from a review of such a strongly moral character, who also got things done, who also delivered on promises.  That the book is so strongly personal in  its scope does suggest to me a mild corrective in relating in somewhat more detail what I regard as the most important events of Hammarskjold’s all-too-brief time, his eight-year ministry (1953-1961). These were, firstly, the events of 1956, when peacekeeping was born, and Hammarskjold defined himself and his job, “for succeeding generations”.  Then we will have more to say on the subject of the birth of peace enforcement operations in the (former Belgian) Congo in 1961, and then their near-disappearance from the UN’s tool kit, for the next more-than 30 years.

END_OF_DOCUMENT_TOKEN_TO_BE_REPLACED

Jean-Marie Guehenno was appointed United Nations Under-Secretary General for Peacekeeping Operations (USG PKO) in 2000, and held that position until 2008.  A “scholar-diplomat”, as one blurbist has characterized him, he was until  his appointment without direct experience of the United Nations.

The Department of Peacekeeping Operations (DPKO) was created in 1992 from the Department of Special Political Affairs, which had been responsible for PKOs since their inception in 1948.  The then USG for that Department, Marrack Goulding, assumed the leadership of the new DPKO until he was succeeded by Kofi Annan in 1993. Annan was replaced by Bernard Miyet of France in 1997 when Annan  became Secretary-General[2].  Since then all DPKO USGs have been French, and on 1 April  of this year Jean-Pierre Lacroix will replace Herve Ladsus.

The book is engagingly written, and conveys well the feel of the immediacy of high diplomacy, but careful readers may find some things missing.

END_OF_DOCUMENT_TOKEN_TO_BE_REPLACED

In the course of a 37-year military career, which included UN peacekeeping missions in Cyprus, Bosnia-Herzegovina, Serbia and Croatia, I never once read or even saw a copy of the Charter of the United Nations. I don’t know of any other officers who did, nor did I ever even hear it discussed. And, as for our understanding of our employment and of our missions, that was pretty much it for my generation of officers. And still it seems today that much current debate, even at very high levels, is little better informed and no less careless of details than were my generation.

This is just not good enough. Ill informed debate is not useful discussion, and we have learned the hard way that unrealistic expectations produce ill judgement, which can and often does lead to self-fulfilling prophecies of failure.

To the extent that the United Nations is the pre-eminent system and authority for, inter-alia, the maintenance of international peace and security, and to the extent that we really do care about these issues, we need to know the Organization better, and there is no better way to know this Organization than through familiarity with its mighty Charter. (As you can see from the illustration above, I have since put a lot of miles on my copy of the Charter, even, as you can also see, while I was in fact working Chapter VIII.)

The Charter of the UN is a remarkable document. Drafted in 1945, and entering into force just six months after the drafting, it has been amended on only four occasions, the last over 40 years ago.

We will in this article describe and explore the following Chapters of the Charter of the United Nations:

END_OF_DOCUMENT_TOKEN_TO_BE_REPLACED

By Jamie Arbuckle, for Peacehawks

Have you heard the one about how many Peacekeepers it takes to change a light bulb?

Actually, any number will do – but the light bulb has to want to change.

One of the most critical factors in modern peace operations has, since the creation of the United Nations, been the issue of consent to and the continuing support for an operation.  The  UN is hard-wired for consensual operations; it’s in the DNA, in the Charter:

END_OF_DOCUMENT_TOKEN_TO_BE_REPLACED

“Militaries that are doing something bad sometimes go into their shell. It’s them against the world.”
– Admiral Dennis Blair, CinC U.S. Pacific Command, on the Indonesian Armed Forces, in 1999.
“ … cutting off contact with Indonesian officers only makes the problem worse”
– Paul Wolfowitz
“Better to light a candle than to curse the darkness.”
– Confucius

- a book report by Jamie Arbuckle for Peacehawks:

If You Leave us Here, We Will Die – How Genocide was Stopped in East Timor, by Geoffrey Robinson, Princeton University Press, Princeton, 2010, 317 pages, $35

This book tells of the terrible and the wonderful events in East Timor, centred on but not limited to the years 1999- 2000, and of the candles that were lit then. For us the messages in this book are three, and they bear directly on our central belief that peace must be maintained at least as robustly as it is violated. These three messages concern:
END_OF_DOCUMENT_TOKEN_TO_BE_REPLACED

Shall I say what I mean?
Mean what I say?
– Marianne Faithful

The issue of consent to an operation is central to the mandating and the conduct of all interventions. The post-Cold War surge in intra-national conflicts has increased the importance of this issue, as interventions almost inevitably encounter issues of national sovereignty. In Sudan, especially in the West Darfur region of Sudan, we see today most clearly the ongoing struggle between, on the one hand, national sovereignty, domestic jurisdiction and “host” consent and, on the other hand, a clear case of a need – some would say a responsibility – for outsiders to intervene.
END_OF_DOCUMENT_TOKEN_TO_BE_REPLACED

Our Statement of Intent

Peacehawks is founded on the premise that international peace and security can and ought to be enforced just as are state and local laws for the protection of a democratic society - in other words, international peace with teeth and talons.
learn more...
Tweets by @ingleh