- a review of a book by Ben Hoffman,

reviewed for Peacehawks  by Jamie Arbuckle

In my intermittent “tours” as a peacekeeper, I learned little of substance about peacekeeping. I had never opened the UN Charter, I knew nothing of the UN, and I neither understood nor thought much about peace. It was like the weather: if it was nice I enjoyed it, but I was preparing for storms. I became an NCO as the Berlin Wall was being built; I became an officer during the Cuban Missile Crisis – I thought my concerns well placed.  If I had any knowledge of the principles of peacekeeping (and I knew a lot about the principles of war), my knowledge was limited to some self-evident truths, like

That complacency in ignorance was pretty typical of my generation of military officers – none of it was wrong, no one to my knowledge had any more mature principles to offer; peacekeeping was, after all, “no job for a soldier.”

Then, out of uniform for the first time since my teens, I went to work at the Lester B. Pearson Canadian International Peacekeeping Training Centre (the PPC), where the scales were gently but firmly struck from my eyes.

In my first experience there, I worked with Ben Hoffman on a course on mediation and negotiations for peacekeepers. I had, like most of us at that time, and not just those of us in uniform, been engaged in this sort of thing almost throughout my career – and, throughout my career, remained nearly totally ignorant of what I was doing, and how to set about doing it.  In the next five years, mostly at the PPC and often working with Ben Hoffman, I learned more about peace than I had learned in the past nearly 40 years in uniform. Well, they say the first 50 years are always the hardest.

Just the sort of thing which should have been available to all of us in peace operations, is exemplified in this very small book by Ben Hoffman, The Peace Guerilla Handbook.

In an ideal world, doctrine comes first. Doctrine matures, through experience, into principles, and together these lead to practices. Continually tested and re-tested, interwoven and interacting, these eventually produce a mature body of knowledge and practice. When they all work together, we may say that doctrine is strategic, principles are operational, and practices are tactical.

For its first 50 years, peacekeeping was none of the above. There was no doctrine, there were not even definitions (peacekeeping is a term which to this day occurs nowhere in the Charter of the UN).  The first attempt to address this was “An Agenda for Peace”, produced by the Secretary-General of the UN in 1992.  This document, by no means universally applied nor even particularly widely accepted,  did not  mention peace enforcement, which is the subject of Chapter VII of the Charter.  The UN Security Council, having only twice in its history authorized a peace operation in accordance with Chapter VII, in 1993 passed seven such resolutions in respect of the “peacekeeping” operation in the former Yugoslavia.  Absent any doctrine, this strategic shift in peace operations produced no changes in force structure, strength or even rules of engagement – mission creep was born, and the international community thus crept forward to Srebrenica, Rwanda and Somalia. Somewhat belatedly, to put it mildly, the Secretary-General did produce in 1995 “A Supplement to the Agenda for Peace”, which  at least mentioned enforcement operations, without providing much else which might have guided those trying to effect this new wave of mandates. The Supplement also opened the door, even if only a crack, to prevention and to analysis, both of which are fundamental to Ben’s approaches to conflict analysis and transformation.

So if on reading this book, you find some of it self-evident, know then that what is in this book was never at all clear to your predecessors, and that if you enjoy today a mature body of doctrine, principles and practices, know then that you stand on the shoulders of those to whom it was never thus.

In my first trades course, as an infantry signaller, I was taught four principles of communications: brevity, accuracy, simplicity, security; codeword BASS. And it remains the essence of communications that “brevity is the sole of accuracy”.  The Peace Guerilla Handbook, at 15 x 10 cm and 83 pages, packs into your bush jacket pocket just about everything I didn’t know about peacekeeping when I was doing it, plus nearly everything I’ve learned since.

Ben sets forth his intentions with his accustomed brevity, and his introduction is worth quoting at some length:

This handbook puts flesh on the bones of commonly recited “best practices” for peacebuilding: that action be theory-informed, holistic, comprehensive, collaborative, facilitative and sustained. It goes further, calling upon the peacebuilder to apply unconventional methodologies to an ever-vigilant effort  to remove violence  and to build the conditions  in society that will make positive peace sustainable.  Violence prevention  and peacebuilding are action agendas  requiring professional skill, assertiveness, political savvy and staying power.  Peace agreements must be “won” by those who strive to reduce violence in the world.  Sustainable peace must be nurtured and grown through the slow process of transforming power from violent to peaceful forms. To do this, the peacebuilder must  “wage peace”.  (p 1)

Ben teaches that conflict is inherent in the experience of individuals, organisations and states. Conflict can be productive, and is often essential to progress.  Consensus can be over-rated, and may deaden discourse and impede productivity. Conflict is omnipresent in all our affairs.  In other teachings and writings, Ben differentiates between latent (non-violent) and manifest (violent) conflict. Clearly, it is violence which is the enemy, and which must be the objective of all peace work.  Thus, as Ben says, “There is less emphasis on conflict resolution and more on identifying, targeting and reducing violence.”  In other words, the goal will realistically be aimed at conflict management, and less at conflict resolution.  “Conflict … is not the enemy of peace.  Violence is.” (p 18)

Ben has taken most of the traditional principles of war and turned them inside out, to become the principles of peace. He is not the first to use more aggressive terminology than is normally used in peace studies and operations: Marrack Goulding, formerly Under Secretary-General for UN Peacekeeping Operations, entitled his memoirs Peacemonger; we call ourselves Peacehawks.

A Peace Guerilla, Ben says, is “committed to a world where people live in non-violating relationships  with others,  … wages peace to help .. realize such a world …  takes a ‘whole of problem’ approach to wage peace … is a catalyst …”  Ben then sets out eight principles for the Peace Guerilla, which are actually clever inversions of the traditional principles of war (which are usually ten in number).  The principles, in brief:

… and how often have we tried to make that last point, to politicians and journalists: in peacebuilding, there can be no deadlines and usually no headlines – just slow, grindingly slow progress.  We hope.  Still.

There are several other notable points which arise from the Peace Guerrilla’s Guiding Principles:

Having said all that, it must also be said that it is not entirely necessary always to be strictly descriptive; it is acceptable to be prescriptive: to suggest what ought to be, rather than endlessly telling us what is – and that most of you already know anyway.

“Those who ‘wage peace’ are challenged to transform the forms and expressions of power in a violent society or state from power over (violence) to power with (peace). For most societies, Rule of Law will under-gird positive peace, ‘power with’.” (p 19).

This process is described in more detail in Ben’s three-fold “Power Axis”, where “the challenge is to move ‘up’ the POWER AXIS, from ‘power over’ to ‘power with’.  This is illustrated thus: 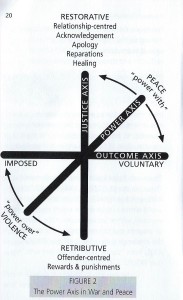 Can any outsider move the cursor “up” along that axis?  We would like to think so, and thinking so is just one of the things which keeps us coming back but, after 40 years of this, we’re beginning to wonder.

It may very well be that Ben is here being more prescriptive than descriptive; likely he is being both.  However you see this, as what is or what might be, if you  are  truly interested in peace, especially if you have practical interests in such operations, you must for your own sake and for the sake of your partners and collaborators, read this book – put it in your pocket – and keep it there.

Sometimes, Ben shows us, less is more.  And don’t forget: simple does not mean easy.

Our Statement of Intent

Peacehawks is founded on the premise that international peace and security can and ought to be enforced just as are state and local laws for the protection of a democratic society - in other words, international peace with teeth and talons.
learn more...
Tweets by @ingleh